The most Frequent GMP Deficiencies in Quality Control

The quality control area is a particular focus of the inspectors during every FDA inspection. Here, violations of GMP regulations are found particularly frequently, as can be read in numerous warning letters.

This article describes the type and frequency of GMP deficiencies in the quality control laboratories of the inspected companies on the basis of a systematic review of the Warning Letters citations. The data scope of this analysis includes the published Warning Letters of the fiscal years 2017 to 2021 (Oct. 2016 to Sept. 2021), which were addressed to manufacturers of finished medicinal products and contract laboratories. The citations examined refer to the following sections of the Code of Federal Regulations (21 CFR):

The paragraphs 211.167 Special testing requirements, 211.170 Reserve samples, 211.173 Laboratory animals, 211.176 Penicillin contamination, which also belong to "Subpart I - Laboratory Controls", were not included in the analysis, as they are not or only occasionally cited in connection with GMP violations in the warning letters of the last 5 fiscal years.

The analysis of the frequency of GMP deficiencies assigned to the respective CFR paragraphs, considered over the period of 5 fiscal years, is shown in the chart in the next page.

According to this, the most frequent GMP deficiencies in the quality control area concern the tests prior to release of the product as well as stability tests; the latter were cited particularly frequently in the last fiscal year (2021).

The following describes the deviations from the requirements of the four CFR sections in the form of a summary of the GMP deficiencies as cited in the warning letters within the period under review. 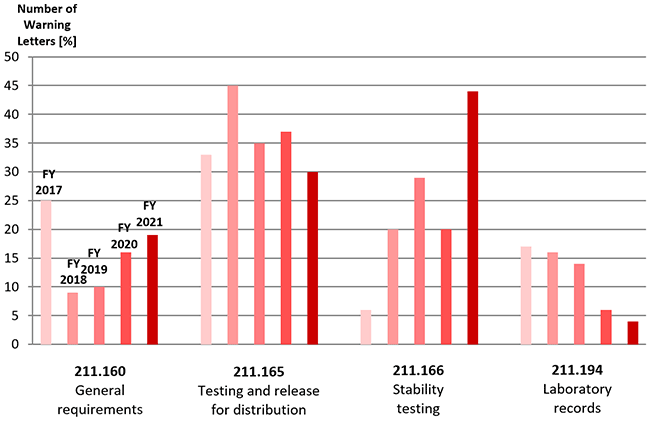 The deficiencies described in the warning letters with reference to paragraph 211.160 concern the following issues:

§211.165 Testing and release for distribution. (Subpart I- Laboratory Controls)

Your firm does not have, for each batch of drug product, appropriate laboratory determination of satisfactory conformance to final specifications for the drug product, including the identity and strength of each active ingredient, prior to release. o Finished products are released for sale without testing for compliance with specifications. This is the most common violation of GMP rules cited in the Warning Letters with reference to 211.165. In isolated cases, this deficiency also affects active substances that are released for further processing without appropriate compliance testing. o Non-validated test methods are used.

Your firm failed to establish and follow an adequate written testing  program designed to assess the stability characteristics  of drug products, and to use results of such stability testing  to determine appropriate storage conditions and expiration  dates.

Your firm failed to ensure that laboratory records included complete  data derived from all tests necessary to assure compliance with established  specifications and standards.

The analysis of the warning letters shows that in many cases, the  basic requirements for GMP-compliant work in the quality control  laboratory as well as special requirements, e.g. for the performance  of stability studies, are violated; the frequency of the latter  has increased significantly in recent years.

All in all, this kind of insight into the deficiency reports that repeatedly  appear in the warning letters and the scenarios described  there, some of them in detail, can be useful for preparing for an  upcoming FDA inspection.

About the Author
Dr. Gerhard Becker
... is Operations Director and organises and conducts courses and conferences on behalf of the ECA Academy in analytical and compliance topics.