Looking at the Warning Letters the FDA sent to manufacturers of active pharmaceutical ingredients (APIs) over the past few months, it is first noticeable that in the fiscal year 2018 (FY 2018; Oct. 2017 - Sept. 2018), the number of Warning Letters (20) is similar to the last FY 2017, in which 23 Warning Letters were issued to API companies. In the fiscal years before, both the total number of Warning Letters sent and the proportion of Indian and Chinese addressees were lower.
For some time now, FDA inspectors have been focusing on the GMP-compliant handling of data from production and above all from the laboratory sector in companies that manufacture both finished medicinal products and active pharmaceutical ingredients (keyword "data integrity").*
The ICH guideline Q7, which specifies the GMP rules according to which active pharmaceutical ingredient companies must manufacture, contains a corresponding passage regarding the integrity of electronic data in Chapter 5, "PROCESS EQUIPMENT", 5.4 "Computerized Systems" in Section 5.43:

Among the "active substance Warning Letters" of the fiscal years 2017 and 2016, violations of the requirement for data integrity were the front-runners in the frequency of the cited deficiencies. Even in FY 2018, quotations on this topic are still very frequent (third place in the frequency), which read as follows:

"Failure to exercise sufficient controls over computerized systems to prevent unauthorized access or changes to data." 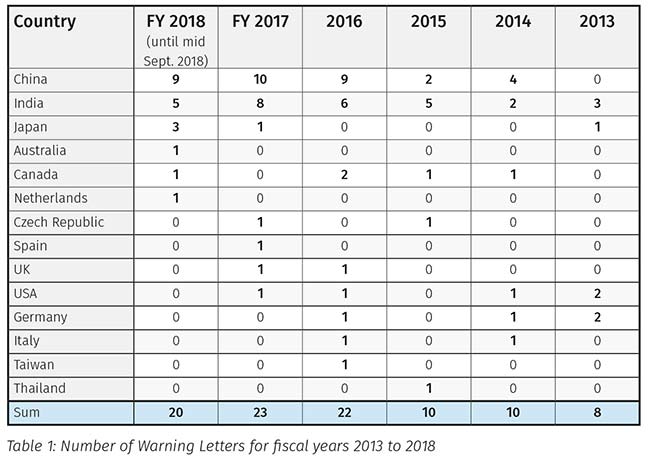 The more detailed explanation of this finding can usually be read as follows (example quotation from a WL from 19 April 2018 to a Chinese active ingredient manufacturer):

"Laboratory equipment used to generate analytical data for batch release purposes by your quality unit lacked restricted access. For example, the high-performance chromatography (HPLC) and gas chromatography systems each had a single username with administrator rights. All users could delete or modify fi les, and there was no mechanism to trace individuals who may have created, modified, or deleted data generated by computerized systems."

However, in the current fiscal year, a violation of the GMP-compliant handling of analytical data in the laboratory is the most frequent GMP deficiency. ICH Q7 defines the following in Chapter 6, "DOCUMENTATION AND RECORDS, 6.6 "Laboratory Control Records", Section 6.60:

Seven out of 20 companies that have received a WL so far have violated these principles, partly for different reasons, as the detailed description in the WLs shows: 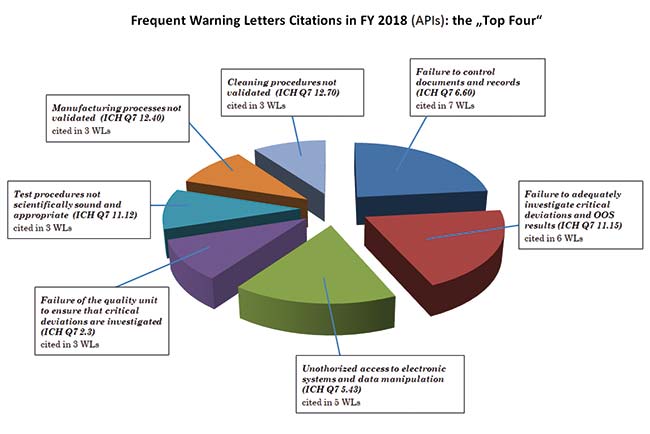 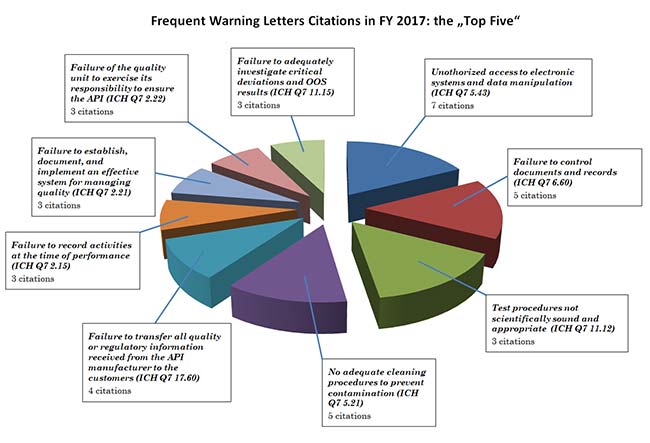 Fig. 1 & 2: The four most frequent deficiencies in active substance sites in the fiscal years 2017 and 2018

"You released numerous drugs without completing all required testing. You claimed that the drugs were tested for identity and assay, and met required specifications for these attributes. However, these tests were never conducted …"

Another frequently occurring error - also from the area of quality control - relates to the handling of out-of-specification results after analysis runs. In Chapter 11, "LABORATORY CONTROLS", 11.1 "General Controls" in Section 11.15, ICH Q7 calls for causal research and clarification of an OOS result:

"Any out-of-specification result obtained should be investigated and documented according to a procedure. This procedure should require analysis of the data, assessment of whether a significant problem exists, allocation of the tasks for corrective actions, and conclusions. Any resampling and/or retesting after OOS results should be performed according to a documented procedure."

Here it were 6 out of 20 companies that had not implemented this requirement and either ignored "inappropriate" analysis results or had insufficiently clarified their cause.

"Your firm ignored aberrant analytical test results rather than investigating them, determining the root cause, and implementing appropriate corrective actions."

"Our review of your out-of-specification (OOS) investigations found that you lacked adequate procedures for investigating, and scientific justification to invalidate, OOS results."

Another fact can be derived from the analysis of the Warning Letters: The proportion of Chinese (over 50%) and Indian (approx. 35%) companies with non-GMP-compliant working methods in the quality control laboratory is comparatively high.

A review of the Warning Letters and the deficiencies described therein makes it clear once again that the focus of FDA inspectors continues to be on the issues of "handling (raw) data", "handling deviations (OOS)" and data integrity. However, elementary "good manners" in the manufacture of active ingredients, such as demonstrating that cleaning procedures are efficient or that validated analytical methods are used, are also of fundamental importance when FDA inspectors visit the plant.

The detailed study of Warning Letters thus provides a lot of valuable information that can prove very useful for inspection preparation.

Note: In the members' area of the ECA website, you can find a detailed analysis of the WL citations of the fiscal years 2016 through 2018.

References
* In this article only the "Active Substance Warning Letters" are considered; an analysis of the WLs to the manufacturers of finished medicinal products will appear in a later issue of the GMP Journal.

Author:
Gerhard Becker
... is Operations Director and organises and conducts courses and conferences on behalf of the ECA Academy in analytical and compliance topics.

Revision of USP <781> Optical Rotation
Revision of USP <831> Refractive Index
Revised Ph. Eur. Chapter 2.1.3. Ultraviolet Ray Lamps for analytical Purposes Published for Comments
FDA Warning Letter to Mexican Manufacturer based on Review of Documents
FDA stops another Delivery of Hand Sanitizer at the US Border
FDA stops Hand Sanitizers with too low Alcohol Content at the US Border