The GMP world was turning a bit slower in 2016 - now, it's picking up speed again. Currently, several crucial changes are being made with consequences for national legislation as well. There may not be a great amount of guidelines being changed or revised at the moment, but some of the changes that are being made do have significant impact (e.g. for manufacturers of investigational medicinal products, parenterals or ATMPs). This also became evident in the course of a live Webinar1, presented by Dr. Bernd Renger on 12 December 2017 . Thanks for most of the information in this article goes to him.

To prevent future deviations from the guidance, the restructuring won't be in the form of a directive which gives the Member States certain freedoms when transposing the directive into national law, but in the form of a regulation (the Clinical Trial Regulation = CTR), which is directly applicable without needing to be transformed into national law. This Clinical Trial Regulation will come into force as soon as the EU's new submission portal for clinical trials has been implemented. A transitional period of three years will follow. However, there are some delays at the moment (probably until 2019).

What does this mean for marketed products - products that have been authorised already?

It has been decided not to revise Directive 2003/94 but to replace it by a completely new one. It was published in September 2017 ("Commission Directive (EU) 2017/1572 of 15 September 2017 "supplementing Directive 2001/83/EC of the European Parliament and of the Council as regards the principles and guidelines of good manufacturing practice for medicinal products for human use"). Being a directive it has to be transposed into national law - in contrast to a regulation. The directive entered into force already twenty days after its publication (i. e. on 6 October 2017). But it applies only as of the date of applicability of Regulation (EU) No 536/2014 (which means depending on the operability of the European Portal and the corresponding database).

Article 12 of the Delegated Regulation 2017/1569 also regulates the responsibilities of the Qualified Person (QP) in connection with Regulation (EU) No 536/2014. The QP shall be responsible for the following:

where investigational medicinal products are manufactured in a third country, verifying that each batch has been manufactured and checked in accordance with quality standards at least equivalent to those laid down in this Regulation and the information provided pursuant to Article 25 of Regulation (EU) No 536/2014 taking into account the guidelines referred to in Article 63 of that Regulation.

The Qualified Person shall certify in a register or equivalent equivalent document provided for that purpose that each batch complies with the requirements mentioned above. The register or equivalent document shall be kept up to date as operations are carried out and shall remain at the disposal of the competent authority for at least five years after the completion of or the formal discontinuation of the last clinical trial in which the product batch was used.

The Delegated Regulation (EU) also contains a rather comprehensive chapter on the topic inspections. In future investigational medicinal products manufactured in a third country have always to be inspected (by the authority) in order to guarantee that they are manufactured by applying GMP standards at least equivalent to those laid down in the Union.

What happens to Annex 13 of the EU Guidelines to Good Manufacturing Practice?

As part of these changes the current Annex 13 of the EU-GMP Guidelines ("Manufacture of investigational medicinal products") is repealed and removed from Eudralex, volume 4. It will be replaced by detailed Guidelines "on Good Manufacturing Practice for Investigational Medicinal Products for human use, pursuant to the second subparagraph of Article 63(1) of Regulation (EU) No 536/2014". The concept paper was published already in August 2015. The comments received in the consultation phase have been published on the EMA website in the meantime. A main point of criticism is the inconsistency of the nomenclature and terminology with Part I and II of the EU-GMP Guidelines.

The aforementioned changes ultimately lead to a new structure of EUGMP guidance. While it is difficult to describe in writing, the diagrams show it quite clearly. 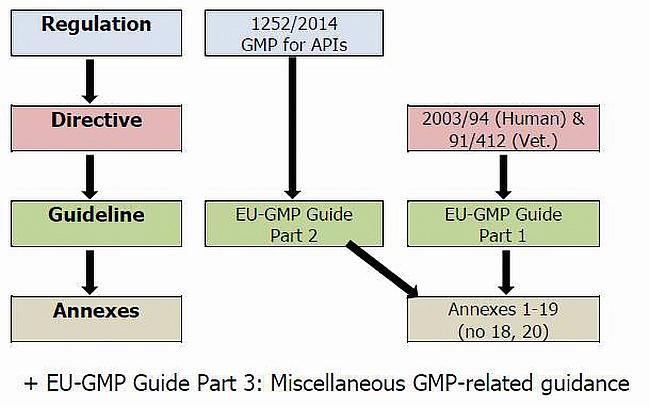 Structure of the EU guidance so far

Future structure of the EU guidance

The long awaited draft of Annex 1 (Manufacture of Sterile Medicinal Products; Targeted stakeholders consultation) was published on 20 December 2017. What's special about it is that the revised Annex 1 won't be an independent EU document. Instead, it will also apply directly for the PIC/S guidelines. Because of the planned revision the current version of Annex 1 and the PIC/S document PE 009 -11 "Manufacture of sterile Medicinal Products" will be replaced. This complicates the developing stage of the final document. Even though it is still just a draft (comments can be submitted until 20 March 2018), the pharmaceutical industry will have to prepare for the following changes: The document document will in general be significantly larger and contain some new provisions and amendments. And the applicability is extended to other products where a strict monitoring of the bioburden is desirable or required ("… some of the principles and guidance … may be used to support the manufacture of other products that are not intended to be sterile (such as certain liquids, creams, ointments and low bioburden biological intermediates) but where the control of microbial, particulate and pyrogen contamination, to reduce it as far as possible, is considered important").

The revised Annex includes a new and longer paragraph on Barrier Technologies (RABS and isolators). Before, only the isolator techno-logy was mentioned. It makes a difference between routine particle measurements and limits for initial clean room classification. Here, the revised and extended standard ISO 14644 (Part 1) also plays a role. As concerns the clean room classes there is not expected to be a reference to self defined room classes ("E" and "F") which usually are already used in practice.

Live Online Conference: GMP for Cannabis – what you need to know

The section on viable and non-viable Environment and Process monitoring was restructured and considerably expanded. Now each single sampling point in grade A must be considered individually (no consideration of the average of several sampling points anymore). In the end, this is part of the required contamination control strategy. It will present a number of challenges, also as concerns the handling of deviations and corrective actions. An exact knowledge of the inhouse microbes and their changes will be essential for the trending of monitoring data.

In manufacturing, almost all the previous points have been expanded, e.g. the requirement for validated downtimes and process times. Container closure integrity testing should be carried out batch by batch by means of an appropriate procedure using a justified number of unities. The new requirements for 100% visual inspection reflect the current state of the art. Trending is expected here, too. The sections on sterilisation have been expanded, but there are no identifiable new requirements, though. New sections and enhancements concern the following topics:

The requirement for a filter integrity testing before and after filtration is still included (pre-use, post sterilisation integrity test - PUPSIT); presumably because it was required by PIC/S.

The part on Aseptic Process Simulation (APS, also: media fill) has been restructured and considerably extended. Deviation assessments and the subsequent corrective actions will be redesigned here, especially. The goal is "zero growth". Should there still be growth, appropriate CAPA measures are expected as well as a new media fill (three repe-titions).

In the next issue of the GMP Journal you will read about the other Annexes of the EUGMP Guidelines and what will become of the MRA, what the challenges are and all the news around ICH Q12 and Q3D.

Author:
Wolfgang Schmitt
... is Operations Director and organises and conducts courses and conferences on behalf of the ECA Academy in the areas QA, GMP and GDP.

Source:
1 A recording of this and further webinars is available at www.gmp-compliance.org/training/recorded-gmp-webinars.