It is 2018 now - and we look back on five years of "Guidelines on the Good Distribution Practice of Medicinal Products for Human Use (2013 / C 343/01)", in the following the EU-GDP Guideline. Looking back over this period of time, one can observe very pleasing developments overall. So my vote is very clear: the EU-GDP Guidelines are a success story. A success story, especially for patients who benefit from the additional gain in drug safety.

The first period after the publication and entry into force of the EU-GDP Guidelines for medicinal products was dominated by very different, often controversial interpretations. Some interpreted them "risk-based" oriented, others did not feel addressed by the guideline, according to the motto: "We have GMP, that's more strict than GDP". And then there were those who tried to implement GDP in their companies - and saw themselves exposed to the questions of others. Those in the first group felt pretty much on the safe side under the protective shield of the risk-based approach - and for doing the one or the other, or for not doing so. In this case, basic principles were frequently ignored, as quality risk management does not exempt you from compliance with legal requirements:

"Appropriate use of quality risk management can facilitate but does not obviate industry's obligation to comply with regulatory requirements and does not replace appropriate communications between industry and regulators." 1 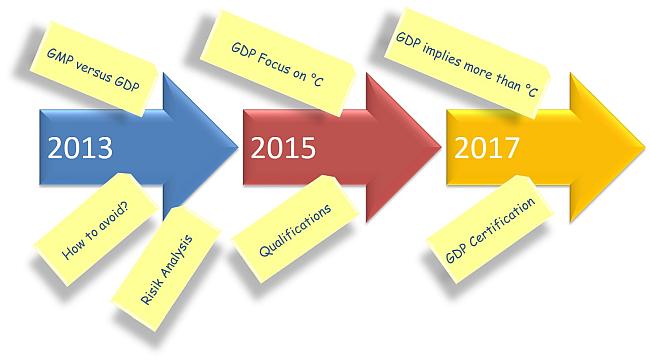 An appropriately designed quality risk m a n a g e m e n t should be seen as an opportunity rather than an overload. 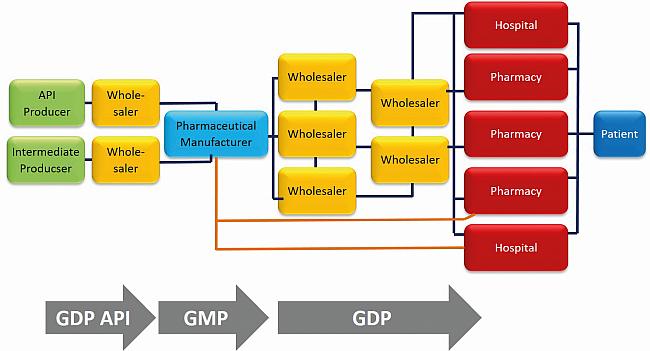 Scope of validity at a glance (own illustration)

In Phase 1 the argumentation that GDP would not concern those who have a GMP certificate was widespread. However, there is no either or. The scopes of GMP and GDP mark two different moments in the supply chain: The GMP area covers the activities of the pharmaceutical manufacturers. Interfaces to the GDP area can be found in the warehouse and in outgoing goods department. GDP then determines the further journey of the medicinal product via the wholesalers up to the incoming goods at the local pharmacy. But even in the border areas it can be clearly seen that measures are being taken to ensure that especially the quality of temperature labile products is not jeopardised (for example by being packed in small cool bags). Properly conveyed, this additional service can be an effective means of customer connection, an aspect that is becoming increasingly important to the pharmacy sector.

From 2015 onwards, the first effects of authority inspections could be clearly felt, although of course it must be emphasized that the inspections were based on the EU-GDP Guideline since they had come into effect in November 2013. The uncertainty about the implementation of the guideline was noticeable. And true to the motto rather 180% than 100% even extreme positions made the round. A good ex- ample can be found in the definition of transport / storage conditions. Only a differentiated approach will get to a result, but initially means a higher effort, because first it must be clarified product-specifically to which temperature category a medicinal product can be assigned to. And this means that above all the pharmaceutical manufacturer is in demand.

In Phase 2, proof of the suitability of objects and facilities was initially in the foreground. Warehouses were qualified and equipped with temperature monitoring systems. Even in such concrete tasks, very large differences in the practical implementation could be observed (contents of the qualification plan and documentation of the results in a final qualification report). The requirement to qualify warehouses initially challenged many logistics service providers. Soon the transport itself came into the centre of attention. The question of suitability and appropriateness of delivery vehicles used was controversially discussed then. The first delivery vehicles with modifications for delivering medicinal products came on the market - some of which were of low quality. Once again, the well-known approach comes true: Quality has its price, but ultimately prevails. By now poor quality builds have almost disappeared. In this transitional phase, there were still many self-qualifications. A uniform and thus comparable industry standard only became possible with the development of DIN SPEC 91323: 2016-03 "Air-conditioned commercial vehicles for the distribution of medicinal products (human and veterinary) - Guidelines for qualification", which was in the making in 2016. The EU-GDP Guidelines were frequently falsely reduced to temperature and transport at this stage.

Since 2017, the understanding has prevailed that GDP is much more than just temperature. Now solutions are sought, discussed and found for complex implementation issues: quality risk management, transport verification and qualification of transport service providers. Especially in the qualification of transport service providers, one encounters again and again free GDP certificates of conformity, which are often falsely referred to as a GDP certificate. A GDP certificate is a certificate issued by an official authority. It certifies a wholesaler with a wholesale license based on applicable national law that he complies with the EU Good Distribution Practice, in analogy to GMP certificates. In this context, however, it is often hidden what type of certification we are talking about. Non-officially issued certificates, free certificates originate from the non-accredited area. In the accredited field such as ISO 9001:2016, but also IFS and TAPA, there are certain requirements for auditors (training, approval, separation of advisor function and auditor role), and the audits are based on a standardised questionnaire. This clear structure and uniformity is mostly foreign to the free GDP certificates, unless the certifying and consulting companies have agreed standards for themselves, as they are required in the ISO area.

Within Europe, we already have a GDP standard with the EU-GDPs. In many EU Member States there are official FAQs that provide answers to key implementation issues. Outside of Europe, though, there is a colorful patchwork quilt. Many of these GDPs are strongly based on the WHO Good Distribution Practices2. However, there are also some examples that probably carry the label GDP wrongly - as, for example, the Russian GDP, in which the exploration of commercial standards is often in the foreground.